First 2017 opening of my hives

Here in central Kentucky it has been a very mild winter. Many days were above 45°F, which meant bees flying and drinking from my bee waterer. 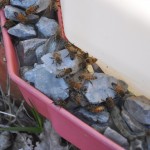 On these warm days I observed lots of activity at the entrances of my hives, which has made me curious about what is going on inside. However, I have a policy of not opening hives and disturbing the clusters until we have consistent weather above 60°F. That time finally arrived this week as daytime temperatures climbed above 70°, and I took my first look inside. 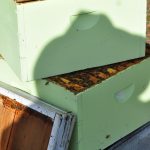 Normally my first peeks into hives in the spring are what I call popping lids – a quick look to tell me what I need to know NOW. Further examinations I postpone till a little later in the season. So on a sunny day, with a temperature of at least 60°F, I remove the lid and outer cover. By looking down between the frames and taking note of the number which appear to be covered with bees, I can estimate the population in the top box. I then lift the top brood box off. Its weight will give me an idea of the amount of food which the colony has to sustain it through what’s left of the cold weather. A heavy box reassures me that the stores are ample. If it lifts off with little effort, I know that I need to do some emergency supplemental feeding. Typically, by mid-winter most of the food stores in the bottom box have been consumed, and the bees are very dependent on what remains in the top. While I have the top box off the hive, I look in the bottom to get an idea of how many bees are there. By mid-winter the cluster has often moved entirely into the top box, so I am not concerned if I don’t see many in the bottom. Having gained all the useful information I can without moving frames, I reassemble the hive.

Yesterday I did this on several hives, and was happy to see that there were healthy clusters of bees in the top boxes of all of them, and that most had enough food stores for the coming weeks. However, since it was such a nice day, and the weather forecast called for several more days of temperatures in the 70’s with lows only in the 50’s, I decided to remove a few frames in a couple of hives to see how things were developing. I was only interested in whether or not the colonies were starting to produce brood to build up for the new season. Seeing it also assured me that the queen was present in these hives. Of course, I did not need to see her; the presence of brood told me she was home, and doing her job of laying eggs. At this point in the season I am not concerned about a complete inspection of the hive. Pulling two or three frames near the center of the cluster in the top box is sufficient. I am not even going to remove frames from all of my 20 hives, just a few. More complete examinations can wait. It is still very early in the beekeeping season in Kentucky, and I have plenty of time. 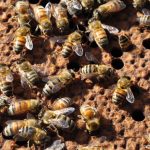 I was rewarded by seeing brood in the hives whose frames I did pull. This gives me hope that my hives will build up early and start honey production sooner than normal – if the weather cooperates. My honey customers will appreciate that since I am almost out of last year’s honey crop, and my shelf at the local IGA will soon be bare.

Of course, things are rarely completely perfect. While lifting top hive bodies I found one which came off much too easily. That means that low food stores in this hive and raises concerns that the hive could starve in the coming weeks, or even days. Most starvation hives occurs in late winter or early spring, as colonies exhaust winter stores before they have a chance to collect new nectar. I dealt with this by inserting part of a winter patty, which is a soft, but solid, form of sugar, designed for this purpose.

These sugar patties should not be confused with “protein, or pollen, patties”. I do not wish to feed my hives protein this early in the year, for fear that it will stimulate too much early brood production. Feeding pollen now can result in even more demand for food, and an increased risk of starvation. Though I did observe stored pollen on many of the frames that I inspected, so they have a sufficient supply of pollen for now. I am content to wait for the onset of a nectar flow and a normal increase of brood. I placed the winter patty on the top bars of the top brood box, directly over the bees, and then placed the inner cover – deep side down, over the patty. The bees quickly started to feed on this sugar patty. Since more warm weather is forecast, I will come back in a couple every few days to see if the patty has been consumed, and give them another when it is gone. I also made a notation in my hive record, and will continue to keep close watch on it.

It is very early in the year, but I am pleased by this first look into my hives. I will attempt to make more posts about what is going on in my hives as the season progresses.

This entry was posted in Hive management, Uncategorized. Bookmark the permalink.