A Tale of Two Nucs: post 4 – Checking on the new nucs

This weekend, I checked on the two nucs I set up a week ago.  Here are some of the things I looked for:

I was pleased to find that the answer to last three questions was yes, and I refilled the feeder jars. However, I was not so fortunate on the first and most important issue.  In Nuc #2, the queen was released and on the comb; it is fine. In nuc #1,  I had messed up. I missed the presence of three queen cells on one of the brood frames. They were probably small and uncapped at the time, but their presence can interfere with the bees’ freeing and accepting the queen I had installed in the nuc. They are now capped queen cells. END_OF_DOCUMENT_TOKEN_TO_BE_REPLACED

Comments Off on A Tale of Two Nucs: post 4 – Checking on the new nucs

Posted in A Tale of Two Nucs

A Tale of Two Nucs: Post 3 – Setting up the nucs

As I mentioned in post one of this series, the queens have arrived and I’m ready to set up nucs. Usually, I establish nucs with purchased queens or, occasionally, from an extra queen I have found in an existing hive. (Yes, we sometimes find more than one queen in a hive.) I have also been known to use swarm or supersedure cells found in existing hives to provide queens in my nucs. I do not advocate setting up queenless nucs and allowing the bees to produce queens from eggs or young larvae. One reason is that this method sometimes produces poor quality queens, and sometimes none at all. Another is that the time required for the nuc to produce a laying queen from eggs or young larvae is over three weeks, compared to a few days with a purchased queen, and about a week and a half with capped queen cells. I want to see the population of the nuc grow quickly, not to wait weeks for the numbers to increase. If you add the three weeks it takes to rear a new queen from an egg and to get her laying, to three weeks for the new eggs to mature into young bees, you are waiting six weeks.

To set up nucs we need a nuc box or a hive. A nuc box is just a small hive used for the convenience of the beekeeper; the bees do not care about the size of the box. Five frame boxes are most common, END_OF_DOCUMENT_TOKEN_TO_BE_REPLACED

Comments Off on A Tale of Two Nucs: Post 3 – Setting up the nucs

Posted in A Tale of Two Nucs

Tale of Two Nucs: Post 2 – Why make and maintain nucs?

Many beekeepers use nuc production as a method of swarm control. By removing brood and bees from strong hives in the spring, before they begin swarm behavior, beekeepers can often keep the bees they have while simultaneously either increasing the number of their hives or producing nucs for sale. I also use them as a method of storing queens for later use, both for short term storage of multiple queens in a single nuc (a queen bank), and for individual queens in nucs which may be combined later with existing hives for queen replacement. In reality, I set up nucs from spring through mid-summer, as I have time, available queens, and strong hives to serve as a source of brood and bees, without a firm plan for how any individual nuc will be used in the future. By May or June I may have set up one nuc for every four or so hives in my apiary. Some of these will become full sized colonies, but others will be used for different purposes.

If I should discover that one of my hives has become queenless, I can have a new queen in that hive in ten minutes by combining an established nuc with the queenless hive. I also use the nucs as a source of replacements for aged and failing queens, and for queens producing offspring with undesirable genetic characteristics. END_OF_DOCUMENT_TOKEN_TO_BE_REPLACED

Comments Off on Tale of Two Nucs: Post 2 – Why make and maintain nucs?

Posted in A Tale of Two Nucs, Hive management

My queen shipment has arrived, and I will start making nucs tomorrow. The first post in A Tale of Two Nucs will follow shortly. As I mentioned earlier, this series will begin with the making of two nucs and will follow them until they are established. For new beekeepers, think of a nuc as a starter hive, set up with several frames taken from an existing hive. These frames contain drawn comb with bees, pupae (final stage of developing bees), honey, and pollen – a bit of everything a colony needs, except a queen. She is added separately, usually in a queen cage.

My queens arrived in a device called a battery, a method used for shipping several at a time, usually 15 or more. The queen cages, either wood or plastic, are the same as for queens shipped individually. The difference is in the attendant bees. In a battery, there are no attendants in the cages, each of which contains a solitary queen. 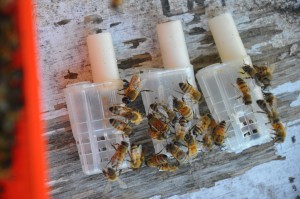 Posted in A Tale of Two Nucs, Hive management