Posted on October 26, 2014 | Comments Off on Beekeeping in Montana 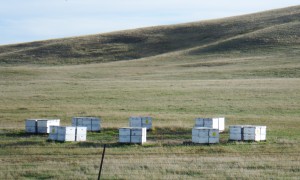 Last week found me in Lewistown, Montana, attending and speaking at the annual Montana State Beekeepers convention. Montana is one of the largest producers of honey in the United States. In 2013 almost 15 million pounds of honey was produced by beekeepers in Big Sky Country. One might think that this very northern state, Montana’s northern border is with Canada, would not be a great area for honey bees. While the winters are very cold in Montana, in summer the plains explode into color with blooming plants, including yellow sweet clover. Coupled with extremely long days, which give bees more time to haul in nectar, production of 200 pounds per hive is not unusual.

• Montana has only about 200 (registered) beekeepers. Of this 200, 36 are commercial beekeepers, who are responsible for the vast majority of the 14 million pounds of honey production. This equals about 417,000 pounds (35,000 gallons) of honey per beekeeper.

• There are approximately 145,000 hives in Montana, again the vast majority – if not all (the small scale beekeepers may not be included in these hive count statistics) – are owned by these 36 commercial beekeepers. This equals about 4000 hives per beekeeper, which does not surprise me. Often when I am at meetings where there are large numbers of commercial beekeepers, I’ll hear I’m only a small beekeeper, I just have 1,500 hives!

• With production of 15 million pounds and 145,000 hives, we get an average yield of 100 pounds per hive, which many beekeepers would consider excellent. However, I had beekeepers at this year’s Montana state meeting tell me that this year (the statistics I have been quoting are for previous years – 2014 information is not yet available), many hives yielded 200 pounds this year. the best production was in Eastern Montana, due to better rainfall.

Comments Off on Beekeeping in Montana

Posted in Phil's travels!, What other beekeepers are up to

This post is only partly about beekeeping, but it does start out with beekeeping or, at least, honey. I recently received an invitation from my friends Ed and Elaine Holcombe to judge honey at their local county fair in Shelbyville, Tennessee. Ed is known for his beekeeping and queen rearing skills. He has worked with beekeepers in Croatia and Belarus as part of the USAID program and, in recent years, has been teaching beekeeping classes at Middle Tennessee State University. For the last several years, beekeepers in eastern Kentucky have benefited from his talks on maximizing honey production, which he has given at the Eastern Kentucky Beekeeping School in Hazard. Elaine is known for her skill in making candles and art objects from beeswax, as well as for sharing her interest and know-how with others. She has also taught classes at the Eastern Kentucky Beekeeping School. Ed’s and Elaine’s willingness to travel all the way to Hazard to help our beekeepers was a major factor in my deciding to accept their invitation to judge honey in Tennessee.

So last week my wife, Lee, and I headed to Tennessee for the Bedford County Fair and a visit with Ed and Elaine. Little did we know that the highlight of the trip was to have little to do with honey or beekeeping. END_OF_DOCUMENT_TOKEN_TO_BE_REPLACED

Posted in Phil's travels!, Phil’s reflections, but not beekeeping or barely beekeeping.

Phil is heading to the far side of the world

Posted on March 2, 2012 | Comments Off on Phil is heading to the far side of the world

On March 15th I’ll be leaving Kentucky for several weeks, bound for the far side of the world to serve as a volunteer for the United States Agency for International Development (USAID) in a farmer to farmer program in Bangladesh. USAID programs offer agricultural assistance to developing countries by providing volunteer experts from universities and departments of agriculture to train farmers and local agricultural leaders. The project that I will be working with is coordinated by Winrock International, a non-profit foundation based in little Rock, Arkansas, which recruits volunteers and provides logistical coordination with local organizations in the host countries for farmer to farmer programs. END_OF_DOCUMENT_TOKEN_TO_BE_REPLACED