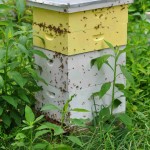 Yes, our honey bees can become little criminals and steal from their neighbors! The threat of larceny is usually not great in the spring and early summer when a good nectar flow is on, but as the flow slows or stops (as occurs from time to time, especially in periods of dry weather), bees are on the lookout for any food they can find. So watch out! It is that time of year. The closest source is often a neighboring hive. Colonies with strong populations can usually defend themselves. New nucs and divides, recently captured swarms, and any hives which have not built up well or which are dwindling due to disease, pests, or other causes, are all likely targets of robbing bees. The culprits may come from your own hives, from your neighbor’s, or from nearby bee trees. END_OF_DOCUMENT_TOKEN_TO_BE_REPLACED

Comments Off on Robbing – honey bees as thieves!

It is the time of year when new beekeepers are getting started! 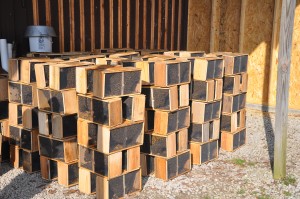 Below are links to several posts I wrote in 2012, that new beekeepers may find helpful.

Here is a post I often get from new beekeepers – 9 frames or 10 in the brood boxes?

This is also right up on the top of questions from new beekeepers (and sometimes from not so new beekeepers) – how do I keep that smoker lit?

Getting Started in Beekeeping – How to Get Bees

Posted on January 28, 2013 | Comments Off on Getting Started in Beekeeping – How to Get Bees

For anyone about to get started in beekeeping, one of the first big decisions is how and where to get the bees. The options include: buying an existing hive from a beekeeper, purchasing a package of bees from a supplier, or purchasing a nuc from a beekeeper or a supplier.  This is a decision which must be made early, 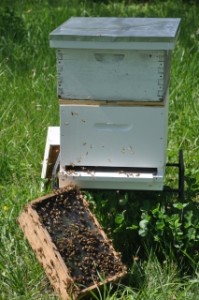 Package of bees being installed into new hive

especially if the choice is to purchase a package or nuc, since availability is often limited and orders must be placed during the winter or early spring. END_OF_DOCUMENT_TOKEN_TO_BE_REPLACED

Comments Off on Getting Started in Beekeeping – How to Get Bees

If you are a reader of Bee Culture magazine, you have likely seen my new question & answer column, titled Ask “Dr.” Phil, in the January issue.

This new monthly column is the result of a series of conversations with Bee Culture editor, Kim Flottum. He asked me about writing some articles for the magazine and, during discussions about possible formats, I told him I would be most interested in writing a Q&A column because answering questions is something that I both enjoy and spend a lot of my time doing. That was certainly the case when I was the Kentucky State Apiarist; a large part of my job was responding to questions, mostly from beekeepers, but sometimes from the general public as well. They came to me through the telephone, at meetings, and in emails. END_OF_DOCUMENT_TOKEN_TO_BE_REPLACED

I’m receiving more and more emails from folks who are interested in beekeeping or who are planning to become beekeepers this spring – beekeepers2Bee. I have been giving advice to new and potential new beekeepers for more than a few years, and much enjoy doing it. I find the enthusiasm and excitement of beginners invigorating. 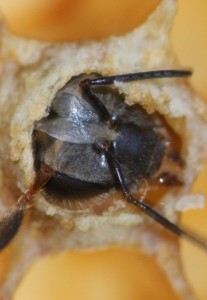 To this group I want to point out my Beginning Beekeeping page here at philcrafthivecraft.com. There you will find beginning beekeeping information and tips waiting for you. END_OF_DOCUMENT_TOKEN_TO_BE_REPLACED

For the Beekeeper’s Book Shelf: The Joy of Beekeeping by Richard Taylor

Posted on December 14, 2012 | Comments Off on For the Beekeeper’s Book Shelf: The Joy of Beekeeping by Richard Taylor

If you’re looking for some winter reading on beekeeping, I recommend Richard Taylor’s The Joys of Beekeeping. This is much more than a “how to” manual, though it does contain pertinent information for the new or novice beekeeper. Compiled from a series of essays, many of which appeared in Mr. Taylor’s Bee Talk column in what was then known as Gleanings in Bee Culture (since shortened to Bee Culture), this is not reading for new beekeepers only. The first essay in this little book – only 166 pages – is titled The Taste of Joy, and the sense of joy permeates to the end. Not a recent book, it was originally published in 1974. I have a 1984 edition, which is the one you will probably find if you seek it out. I discovered this volume many years ago and still pick it back up occasionally, as I did just this morning, to enjoy it again. The section on bee yards, which describes the smells of wax and honey and the sounds of buzzing bees, makes an impression on me every time I read it. This is what I enjoy most about beekeeping: my time in the apiary, those smells and sounds, and the daily discoveries in the hives. Richard Taylor shares with us his pleasure in these simple things. Enjoy!

About Richard Taylor
Richard Taylor may be known to readers as a beekeeper and writer, but his original career, never abandoned, was professor of philosophy. He earned his PhD in that field from Brown University, and during his long academic career he taught at Brown, Columbia and Rochester Universities. He passed away in 2003, but his words live on.

Comments Off on For the Beekeeper’s Book Shelf: The Joy of Beekeeping by Richard Taylor

Ten Frames, Nine, or Even Eight in Honey Supers?

In early May, I wrote a post on the topic Nine frames or ten in the brood box? Since that discussion was confined to brood boxes, I promised a future post on the subject of the ideal number of frames in honey supers. That discussion follows.

In the earlier post, I commented that beekeepers can manage hives with only nine frames, as long as they keep in mind the theory of bee space and the proclivity of honey bees to build burr comb whenever they have extra space available between frames. I ended by saying that, while I had maintained colonies with nine frame brood boxes in the past, I had arrived at the conclusion that using ten is a more productive management style for me, resulting in more bees and higher honey yields. I have a very different perspective when it comes to honey supers. I have used nine frames in my supers for many years, and am currently using eight on most of my hives.

Comments Off on Ten Frames, Nine, or Even Eight in Honey Supers?

Nine frames or ten in the brood box?

I am often asked whether to use nine or ten frames in brood boxes. The answer is up to you, but here are my thoughts.

Conventional beekeeping boxes are designed for ten frames, which allows for the bee space (about 1/4”) between the combs when they are drawn out. Bee space is the largest gap that bees will leave as open space without trying to fill it with unwanted comb. I have often seen hives where the bee space has been violated, and the bees built an extra comb, often attaching two adjacent frames. It is messing with Mother Nature when we push the envelope on bee space, but beekeepers love to be innovative (or sloppy – I’m a sloppy old stick in the mud myself), so we push this limit all the time.

Fortunately, there is some wiggle room in the bee space concept. If we only remove one frame in the brood box and go to nine, keeping the remaining frames evenly spaced, the violation of the bee space is so slight that we can get by with it most of the time. Some beekeepers prefer to use nine frames because it leaves more room between the combs, making it easier to remove and replace frames.

However, it is important to ALWAYS keep these nine frames evenly spaced and ALWAYS, when starting brood boxes with frames containing new foundation, start with ten frames. If you wish to use nine ultimately, remove one when the comb on nine or ten of them has been drawn out. If you start with nine, the bees will often build that layer of extraneous comb right away.

Brood comb – a result of too much space between frames

END_OF_DOCUMENT_TOKEN_TO_BE_REPLACED

Comments Off on Nine frames or ten in the brood box?

I’ll start this post by saying that this an unusual spring here in Kentucky, so my beekeeping is a little off kilter. In more typical years, I put honey supers on in early to mid-April and do not see substantial nectar and honey storage until late April. This year, due to the mild winter and a spring that appeared to start in February, I put honey supers (with drawn comb) on in mid-March. That was a little early but, as you know, I was headed to the far side of the world on March 15th,  and I knew the supers would be needed earlier than usual. When I returned in early April, these hives were overflowing with bees and were already storing large amounts of nectar. I promptly added every super I had onto the hives. By mid-April I had some supers full of honey and now have hives with two supers or more each, full and capped. Next week I’m pulling them and extracting honey. That gives you an idea of the nectar flow here, but the story I was leading up to is the swarming. END_OF_DOCUMENT_TOKEN_TO_BE_REPLACED

Tonight’s episode of Kentucky Life on urban beekeeping in Louisville

My wife and I just finished watching tonight’s episode of KET’s Kentucky Life which included a segment on urban beekeeping. This episode was filmed last summer at the Louisville home of Lorie Jacobs and her husband Ted. I joined Ted and Lori, other members of the Kentuckiana Beekeepers Association (Lorie is president of this group), and Kentucky Life host Dave Suffett, for the filming.  If you missed tonight’s premier showing, it will replay tomorrow (Sunday, April 22nd) on KET at 3:30pm ET. You may view this episode online at the KET webpage.

Notice Dave’s demonstration of the gentleness of Laura & Ted’s bees with his bare hand – a close encounter of the first kind!

Posted in Beginning Beekeeping, Thoughts on beekeeping by Phil, What other beekeepers are up to