Category Archives: What other beekeepers are up to

Posts about the activities of other beekeepers

Posted on October 26, 2014 | Comments Off on Beekeeping in Montana

Last week found me in Lewistown, Montana, attending and speaking at the annual Montana State Beekeepers convention. Montana is one of the largest producers of honey in the United States. In 2013 almost 15 million pounds of honey was produced by beekeepers in Big Sky Country. One might think that this very northern state, Montana’s northern border is with Canada, would not be a great area for honey bees. While the winters are very cold in Montana, in summer the plains explode into color with blooming plants, including yellow sweet clover. Coupled with extremely long days, which give bees more time to haul in nectar, production of 200 pounds per hive is not unusual.

• Montana has only about 200 (registered) beekeepers. Of this 200, 36 are commercial beekeepers, who are responsible for the vast majority of the 14 million pounds of honey production. This equals about 417,000 pounds (35,000 gallons) of honey per beekeeper.

• There are approximately 145,000 hives in Montana, again the vast majority – if not all (the small scale beekeepers may not be included in these hive count statistics) – are owned by these 36 commercial beekeepers. This equals about 4000 hives per beekeeper, which does not surprise me. Often when I am at meetings where there are large numbers of commercial beekeepers, I’ll hear I’m only a small beekeeper, I just have 1,500 hives!

• With production of 15 million pounds and 145,000 hives, we get an average yield of 100 pounds per hive, which many beekeepers would consider excellent. However, I had beekeepers at this year’s Montana state meeting tell me that this year (the statistics I have been quoting are for previous years – 2014 information is not yet available), many hives yielded 200 pounds this year. the best production was in Eastern Montana, due to better rainfall.

Comments Off on Beekeeping in Montana

Posted in Phil's travels!, What other beekeepers are up to

Shortage of Hives for California Almond Pollination in 2013 – Part 2

Posted on February 20, 2013 | Comments Off on Shortage of Hives for California Almond Pollination in 2013 – Part 2

As a follow up to my post on California almond pollination and a possible  shortage of bees this year, here is a link to a video on YouTube. I say possible shortage, because this video was put up very recently and indicates that there MAY be sufficient bees. I think they really won’t know until the bloom gets under way, which is likely occurring about now.

Watch this short video, and you’ll see and hear from an almond grower who spends $100,000 a year to rent bees, and from an inspector with a business called Scientific Ag Company. Scientific Ag brokers contracts between growers needing hives for pollination and beekeepers with available hives. The video shows the inspector checking brood frames and describing the characteristics he looks for to ensure that the grower gets good hives for the fees he pays. Among other things, the inspecter points out that the presence of drones is an indication of a healthy hive – something I often tell beekeepers.

New beekeepers may benefit from seeing some of the traits which a strong colony of honey bees should exhibit. All of us might be interested in a glimpse into a world of professional beekeeping on a scale few of us will ever see.

A Brief Blast of Warm Air and Bees Are Flying!

Weather in Kentucky – from the deep freeze to the balmy 60s and back again. Yesterday my bees were flying and today is almost as warm. I did not see bees bringing in pollen, but would not have been surprised if I had. A beekeeper friend in Bowling Green, Kentucky sent me this photo. The temperature there reached 70°F and his bees were evidently finding pollen from some source. 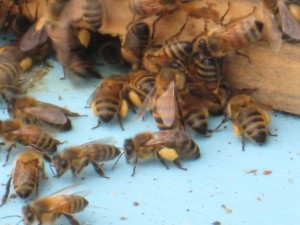 What is blooming now? I suspect this is from dandelions, which flower pretty much year round here in Kentucky, but comment if you think it may be from another plant.

While this warm weather is to be enjoyed (I took my daily walk outside yesterday, instead of on an indoor track), it won’t last. The forecast in Central Kentucky calls for a high of 22°F tomorrow (February 1st).

Posted on April 26, 2012 | Comments Off on Richard Underhill’s beekeeping posts from Ethiopia

If you enjoyed reading the posts from my trip to Bangladesh, you may also be interested in these from Richard Underhill  about his own recent beekeeping trip to Ethiopia. Richard is a beekeeper from Proctor, Arkansas, just across the river from Tennessee. He is past president of the Tennessee Beekeepers Association, current vice-president of the Arkansas State Beekeepers, and has attended Heartland Apicultural Society meetings and the Bluegrass Beekeeping School. I remember my wife typing in the registration forms for the bluegrass school and mentioning that we had someone coming from Arkansas. I said that, technically, he’s almost in Tennessee – depends on the current path of the Mississippi. At one of these meetings, Richard and I became aquainted. Over the years, I’ve enjoyed his friendship and his posts.

Like mine, Richard’s trip was organized by Winrock International. They have approached me about going to Africa as well – we’ll see. Richard’s posts of his Ethiopia trip can be found at his webpage. Just scroll down into March.  The Africa travels are not over for the Underhill family. Richard’s son Tod is presently in Ethiopia, on his own Winrock assignment.

Comments Off on Richard Underhill’s beekeeping posts from Ethiopia

Tonight’s episode of Kentucky Life on urban beekeeping in Louisville

My wife and I just finished watching tonight’s episode of KET’s Kentucky Life which included a segment on urban beekeeping. This episode was filmed last summer at the Louisville home of Lorie Jacobs and her husband Ted. I joined Ted and Lori, other members of the Kentuckiana Beekeepers Association (Lorie is president of this group), and Kentucky Life host Dave Suffett, for the filming.  If you missed tonight’s premier showing, it will replay tomorrow (Sunday, April 22nd) on KET at 3:30pm ET. You may view this episode online at the KET webpage.

Notice Dave’s demonstration of the gentleness of Laura & Ted’s bees with his bare hand – a close encounter of the first kind!

Posted in Beginning Beekeeping, Thoughts on beekeeping by Phil, What other beekeepers are up to