Mid-summer Hive Inspections – They are Important

It is mid-summer, it is hot, and I for one don’t find opening hives to be much fun this time of year. The bees are sometimes grumpier, but mostly it is just the heat. I work bees in my regular summer work clothes (jeans and a t-shirt) along with a veil, and I find it pretty warm. Consider that many beekeepers, especially newer ones, feeling a need for more protection against stings, suit up head to toe in coveralls. For them, it’s even hotter. Never-the-less, if you have not had a look down in the brood boxes for a while, it is time for a mid-summer inspection.

In a recent post I cautioned beekeepers about robbing behavior by honey bees. It’s important to keep that in mind when opening hives, especially in July and August. Because of the threat of robbing and discomfort from the heat, I keep my summer inspections brief – about five minutes. The object is not to look at every frame thoroughly, but to spend just enough time in the hive to make sure that all is well. Only if I find a problem or cannot assure myself by a quick inspection that the hive is healthy, will I prolong my visit or make a follow-up inspection at a later time. Usually I can learn what I need to know by looking at just a few frames in each brood box.

As I go through hives at this time of year, I’m checking for the same things I always look for when inspecting a hive. I’m looking for food reserves, for evidence that the queen is present, for signs of disease or parasites (mainly varroa), and I’m taking note of the colony’s population. If you look at my post written in the early spring, you will see basically the same list, but the time of year and the point the colony has reached in its seasonal cycle affect my concerns and priorities. In the spring, colonies are in a buildup phase at the beginning of a nectar flow; now, in mid-summer, they are slowing down as nectar sources dwindle. In the spring, hive populations are low and beginning to grow; now they should be large but starting to dwindle somewhat. Egg laying was increasing in the spring, in response to the nectar flow; now it is declining.

When I open a hive, even for a quick look, here is how I go about it. After applying a few puffs of smoke at the hive entrance, I remove the outer and inner covers. I place the outer cover flat on the ground and lean the inner cover against the entrance to allow any bees on it to walk back into the hive. I take note of whether or not the top box appears to have bees on all the frames, then I then smoke them again by applying smoke over the frames in the top box. (Smoke

is definitely your friend this time of year – do not be shy about using it.) After waiting about 15 to 30 seconds for the smoke to take effect, I remove one of the end frames, examine it (it is most likely full of honey), and set it on the ground

on end, leaning it against the side or back of the hive. Then I loosen the next frame, pulling it toward me. This frame now sits in the middle of the space previously occupied by two frames, giving me plenty of room to lift it out without crushing the bees on it against an adjacent frame. I remove it, and can tell

without looking that it is full of honey, just from its weight. It goesbackin the brood box, in the space formerly occupied by the end frame. I repeat the process with each frame: loosen, pull towards me, remove and inspect, always keeping the empty space at the point where I’m removing frames. As I glance at each one, I’m taking note of stored honey, brood – both capped (pupae) and uncapped (larvae) – and eggs. I hope to see all three.

I look quickly for eggs, and also take note of food stores. (How many full frames of honey? Honey in the corners of the brood frames? Fresh nectar or only capped honey?) Mostly, I focus on the brood. Does it look normal? Are the cappings on the brood consistent in appearance (slightly raised) and in color? Are there small holes in the cappings of the brood cells? In the area of the frames where I see brood, do many of the cells contain eggs or mostly brood in some stage of development, or is the brood scattered among empty cells? If there seem to be empty cells, might they contain pollen, nectar, or a dark crusted material? Do I see bees that look strange (deformed wings)?

Are the frames all covered with bees? At this time of year most of them should be, unless the colony is a swarm captured late in the season or a recently made nuc.

If I’m satisfied with the way things look after checking as few as three or four frames and observing even a couple of frames of brood and honey, I conclude my examination of the top brood box. I place the frames back in their original positions (being especially careful if I saw the queen on one of the frames), and replace the end frame. After using a little more smoke, I loosen the brood boxes by inserting my hive tool near the corners between the hive bodies and prying and then remove the top brood box. I’ll set the top brood box on top of the outer cover, which I placed on the ground when I first opened the hive. I take note of the weight of the top brood box as I lift it off. A good strong, healthy hive in mid-summer should have a heavy top brood box, possibly very heavy. If it is heavy, that observation alone answers my question about food stores – they are good. If all seemed well in the top brood box, my examination of the bottom box is even quicker. Before removing a frame, I note the bee population; does the box appear to be full of bees? 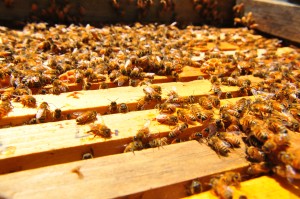 I’ll then smoke the bees and repeat the process at removing the end frame and the second frame. I’ll note if there is honey on the first frame and if there is brood and/or honey on the second frame. Are the frames I remove covered with bees? I’ll repeat this with the third frame. If I was happy with the brood and honey in the top box, it is likely I will only look at three or perhaps four frames in the bottom box, unless they are empty. If they are empty, I’ll quickly look at more – does not take long if they are empty. As soon as I have an idea at what is going on in the bottom box, I’ll place the frames back, set the second box back on and seal the hive back up. Now a very important part of the inspection – I then make notes in my hive log at what I saw and my observations about the condition of the hive.

Watch for a follow-up post on “My conclusions about hive conditions as a result of my inspection”.

7 responses to “Mid-summer Hive Inspections – They are Important”