Ooh That Smell! Can You Smell that Smell – In Your Beeyard?

Posted on October 31, 2012 | Comments Off on Ooh That Smell! Can You Smell that Smell – In Your Beeyard?

Did you detect an unusual smell in your beeyard this fall? Every autumn brings calls from beekeepers about a funny, funky, dirty socks odor emanating from their beeyards and hives. So what’s that smell? It probably comes from aster or goldenrod nectar. This funky odor can be detected upon opening a hive, and sometimes even from outside it. In 2011, it was so prominent that it could be picked up from my driveway – 25 feet from the apiary. While ripened aster and goldenrod honeys have a strong flavor and so are less preferred by some, they would not be considered bad-tasting. However, their raw nectar often produces a sour, unpleasant odor which can permeate the hive and the apiary.

There are many species and varieties of aster. The common nectar source plants are described as small flower asters, and vary in color. I commonly see two types, both with yellow centers and white or blue bracts. The centers are actually made up of multiple single flowers. 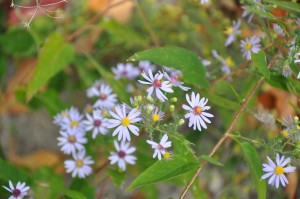 Some beekeepers lay the blame for this odorous fall apiary issue to aster honey and some to goldenrod. I’m not sure who is right. John Lovell in his 1926 Honey Plants of North America states that it is goldenrod, but he also describes un-ripened aster nectar has having a rank smell. I think it is possible that it is both plants. 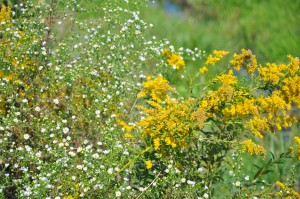 This fall, as most others, I received calls and emails from panicked beekeepers convinced by the odor that their hives were infected with American Foulbrood. An unpleasant smell is a minor annoyance, but AFB is a very serious disease. How to tell the difference? The answer is in your hive. AFB (see http://www.ars.usda.gov/Services/docs.htm?docid=2882) is a disease of capped brood, and the simple observation that the capped brood in your hive is healthy brood will demonstrate that you do not have an AFB problem. Also, it would take a very severe case of AFB to create an odor detectable outside a closed hive. So, chances are, that autumn “funky” smell is only aster or goldenrod nectar. The rank smell even has an upside; it indicatives that your bees are putting away plenty of nectar for the winter. But if you have doubts, contact me. Be prepared to answer the question, “What does it look like INSIDE the hive?”