This is a follow-up to my post of April 13, 2016 which describes what new beekeepers should observe in new hives started from packages, or nucs. A week ago today, on April 15th, I installed five packages of bees. I looked at them today, and wish to share what I observed. These packages were purchased from Clay Guthrie, the manager of the Dadant & Sons branch in Frankfort, Kentucky (Guthrie’s Naturals), and originated in Georgia. 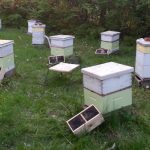 I briefly opened the hives on July 20th, Tuesday to see if the queens had been released. They were all out of the queen cages, so I removed the queen cages, and also some burr comb from a some of the frames in the area of the cages.

Today I saw comb being drawn in all of the hives – on 2-3 frames, also pollen in the drawn cells, and fresh nectar. In four of the five hives I saw eggs. In the hive where I did not see eggs, I saw the queen. There may have been eggs in that hive as well, but I moved quickly, since I was hearing distant thunder. Being caught out in the open in a lighting storm is not my idea of fun. 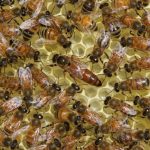 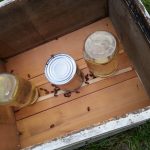 The can between the quart jars is from the package, cans were not empty when packages installed. Today they all came out.

I also saw, and marked, four of the five queens. In the hive where I did not see a queen, I saw eggs. I might comment that do not be concerned if you do not see the queen, especially an unmarked queen. I am pretty good at spotting queens, but still missed one. As I suggest you do, look for eggs, not queens. If I had not planned to mark the queens I would not have looked for them. By next week I will see larvae as these eggs hatch, and more eggs. 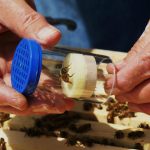