As you might assume from the title of this post, I was around bees today.  We were not actually opening hives (not intentionally, anyway) but close enough.  We started the day with a trip to one of the apiaries with Ayodele Sulaimon, the chief apiculture instructor here at Ado-Ekiti, and a number of his students. 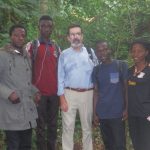 Phil & some of the students

The task at hand was setting up empty hives to serve essentially as bait hives. That is an empty hive placed by a beekeeper, in an apiary or a location where feral colonies are known to exist, in hopes that a swarm will decide to move in.  Result: a free colony of bees!  Beekeepers in the U.S. use this mainly as a method of recapturing swarms from their own hives which they might not be around to catch – either from being busy or because the hives are in out apiaries, too far away to check on daily.  In Africa, it is just a common way of acquiring bees. More about bait hives? In May of 2013 I wrote a Q&A about bait hives in Bee Culture magazine. If you would like a copy of that column just drop me an email.

The hives at Ado-Ekiti are Kenyan Top Bar (KTB) hives, a design that is different from that commonly used in the U.S., Europe, and elsewhere.  Our standard hive, referred to as a Langstroth hive after an early 19th century beekeeping pioneer, consists of multiple boxes stacked vertically.  The KTB is a single, long horizontal box. 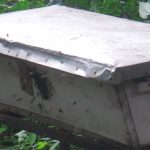 Another major difference between the two types is that a Langstroth hive typically holds ten frames within each of which the bees construct a comb from beeswax, attaching it to the four sides of the frame. The combs are the basis for all honey bee colonies, providing space for honey and pollen storage and for rearing new bees.  Instead of frames, a KTB hive has individual “top bars” or pieces of wood, usually about twenty in number, which are placed across the top of the box.  Comb are attached only to the bottom of the bar.  Top bar hives were the conception of a 1960’s American peace corps volunteer whose objective was to come up with a simple design which could be easily built at low cost with minimal woodworking skills and tools.  Another feature of the model is that the top bars fit closely against each other under the hive cover, forming a surface which prevents bees from flying out from between the bars when the hive is opened.  In Africa, with its more defensive bees, this is a real advantage.  I will talk more about the KTB design in future posts after we begin opening active hives, which should first occur on Friday morning.

Most of the hives in this apiary are newly set up, like those we were working with today, and do not yet contain bees.  However, a few were apparently occupied.  Honey bees in Africa are much more defensive than bees in the U.S., which are descended from the gentler European honey bees.  At home in Kentucky, I work my hives wearing my normal clothing with the addition of a hat and veil.  I would never do that with bees here.  My luggage for this trip contains a newly purchased bee suit, which you will see in later photos.  Today, we were not opening hives, so no one was wearing protective clothing.  Though these bees are quite defensive, if you approach them cautiously you can get pretty close without suffering retribution.

My too close encounter was the fault of my guide, John Iruaga, who lifted the cover from what he thought was another empty hive.  Within seconds several bees were buzzing us.  I suggested we leave and started walking away, but before we could put sufficient distance between ourselves and the irritated bees, we both picked up several stings.  A good lesson in not casually removing lids from ‘empty’ hives.

My hosts introduced me some other types of practical agriculture being taught here, including aquaculture, vegetable crops, and poultry.  John suggested several times to the staff of the vegetable area that they need bee hives in their gardens for pollination. Obviously the disposition of Ayodele’s bees is well known.  John received no positive responses.  Another field in which students are trained at the center is snail culture.  Snails are a popular part of the diet here.  They are not universally appreciated in the U.S, but I suspect that my French friends have a more positive opinion. 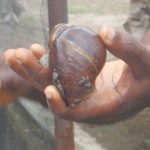 Tomorrow is a lecture day for me. I will give an introductory beekeeping talk to both the apiculture instructors and to other agriculture staff who have an interest in the beekeeping activities here.

I had planned to have photos to accompany this, and future posts,. However, I have a new Microsoft surface pad, and the pad does not wish to communicate with my camera. I will get this issue resolved, or just depend on my Samsung phone for photos.