Nectar flow is on

We are having a good nectar flow in my area, south of Lexington, Kentucky. I started putting honey supers on a month ago, which was later than most years. As in much of the Eastern U.S., we had a hard winter and late spring, my hives were also behind in April, but have caught up now. I’ve had some swarming, but have at least 1-2 full supers on all of my stronger hives, including those that swarmed. Like a lot of beekeepers, I had a couple of what Randy Oliver calls “dinks”, hives that for some reason, are slow at building up, but even these seems to be putting some nectar into supers now.

We had a nice black locust bloom in my area, which started a couple of weeks ago, but storms last week knocked off most of the flowers. I am seeing a lot of white clover blooming now. We’ve had enough rain that blooming should continue. Drought can slow things down quickly. I was north of Lexington last Tuesday and saw a nice locust bloom there, the beekeepers told me it was just starting. This is a difference of about 50 miles, north – south. 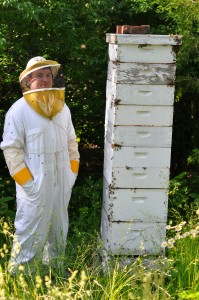 Here is a photo of my son standing next to one of our hives, taken on May 23rd. Five of those honey supers were full on that day and we added two more. These supers are 10 frame supers, but only have eight frames in each super. All of them were placed onto the hive with drawn comb. I’ll also comment that I did not feed any syrup last fall or spring, I did no spring manipulations – no reversing hive bodies or moving comb around. I did do a thorough check of my hives, both early in the spring and last fall. The inspection last fall included varroa mite monitoring.

By far the most important management task that I undertook was treatment for varroa, this was done last fall, after monitoring.

Comments Off on Nectar flow is on