Posted on February 25, 2013 | Comments Off on Bees Are Collecting Pollen & Spring Is Coming!

Daffodils, tulips, and hyacinths – the big, colorful blossoms that we associate with spring – may not have made their annual appearance yet, but spring is gradually moving north. Beekeepers know it because their bees are carrying more and more pollen back to the hives. This activity has been going on for some time further south, and is now reaching Tennessee and Kentucky. Though not the first photos I’ve received of pollen laden bees this year, the two I’m sharing with you here are particularly nice. They were sent to me by my Tennessee friend Fred Sloop. 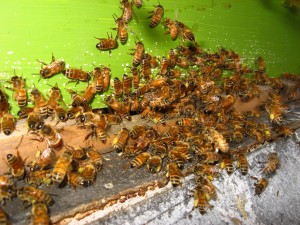 Lots of pollen collection not only signifies blooming in the bees’ foraging range, but also means that brood rearing is underway in earnest in the hives. Pollen consumption is integral to the rearing of new bees and, in the process, stimulates the bees to collect more pollen, which in turn ….. Hence the frenzied activity we are beginning to see.

Maybe there is a beekeeper on staff at National Public Radio, or maybe it’s something in the air. At any rate, a few days ago NPR ran a story about how the collection of pollen by bees  is facilitated by a slight, negative electrical charge in flowers. As bees fly they gain a slight positive charge from friction with the air. When they visit a flower, the pollen is literally electrically attracted to the hairs on their bodies. Honey bees actively collecting pollen will work purposefully to free it from the flower, but electrostatic attraction ensures that the flower’s needs are met whether or not the bee is interested in pollen on given flight. (The NPR spot also sights a recent study at the University of Bristol which demonstrates that bumble bees, at least, can sense the flower’s electrical field and use it to guide themselves to nectar sources and to avoid those which have just been visited by another bee.)

But wait, even more remarkable things happen after the pollen is on the honey bee’s body. NPR left out the most interesting parts. The bee uses her forelegs, which have hairs that she uses like a comb, to brush pollen from her head and abdomen and move it to her rear legs. As she manipulates it, she moistens it with a small amount of honey from her honey stomach. The honey bees’ rear legs contain a most wonderfully adapted structure called the “pollen press”, made up of stiff hairs used to press collected pollen into the pellets we see bees carrying into the hive. The load is balanced by packing the pellets on each leg to approximately the same size. 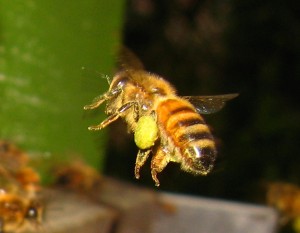 Back in the hive, the pellets of pollen are removed from the rear legs by the middle legs, and dropped into an empty cell.

Click on photo to enlarge – photo by Mary Parnell Carney

The pellets are then compressed into the cells by other bees. A long time ago, I noticed on some of my frames bees which appeared to have makeup on their heads, and wondered what was going on …. One day I realized -these were the pollen packing bees! 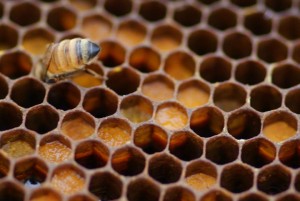 Click on photo to enlarge – photo by Mary Parnell Carney